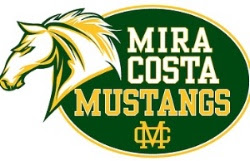 One of the most exciting moments for a student-athlete is National Signing Day.

Years of hard work have led to this moment, and on February 3,  ten Mira Costa athletes will be honored as they look forward to playing at a collegiate level. They will be playing a variety of sports including: Baseball, Softball, Men’s Volleyball, Women’s Tennis and Men’s Water Polo!

Congratulations to our Costa student athletes who will be signing their NCAA letters of intent. These Universities are very lucky to get our Mustangs next year!