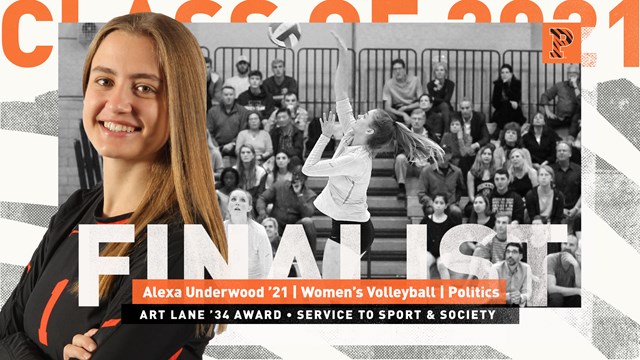 Alexa Underwood, a team captain and outside hitter, helped Princeton women’s volleyball to two Ivy League championships and NCAA Tournament appearances during her career. She has also assumed leading roles in the program’s social media strategy and management of recruit hosting.

Underwood has served as co-President of the Wounded Tigers Network – a support group that aims to break the stigma surrounding injury – and as a board member for the Student-Athlete Service Council. On top of serving as an Associate Editor for the Princeton Legal Journal, she was elected a Representative on the Politics Undergraduate Committee and as an Undergraduate Fellow in the James Madison Program in American Ideas and Institutions.

Underwood has been involved in the First Year/Senior Mentorship Program and as a mentor for Princeton Women in Economics & Policy. She was also elected President of Pi Beta Phi Fraternity, the largest women’s organization on campus.

Underwood is a politics major from Manhattan Beach, Calif.