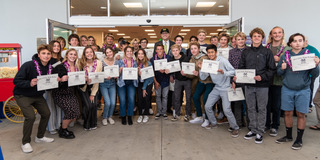 The Mira Costa Surf team concluded Mens shortboard heats on Wednesday, May 15.  Costa has 2 seniors make the Mens Shortboard finals, congratulations to Alex Fry for coming in 3rd and Zach Rosenberg for finishing in 2nd!  Great job everyone!

With the conclusion of All-Stars, the final surf contest the athletes will compete in this year is NSSA Nationals held on Fathers Day weekend at Salt Creek Beach.  Come cheer on the athletes and enjoy a day at the beach!

Subaru Pacific also graciously hosted the year end Surf Team banquet on Tuesday, May 21. The banquet was held at Subaru Pacific in Hawthorne and it was an amazing night.  There was lots of food and drink, plus live music by members of the surf team and tons of awards won.  There were dozens of athlete scholars and 12 graduating seniors honored.  A very special thank you to Subaru Pacific for hosting and Steve Gaffney for the photos.  The year was fantastic!