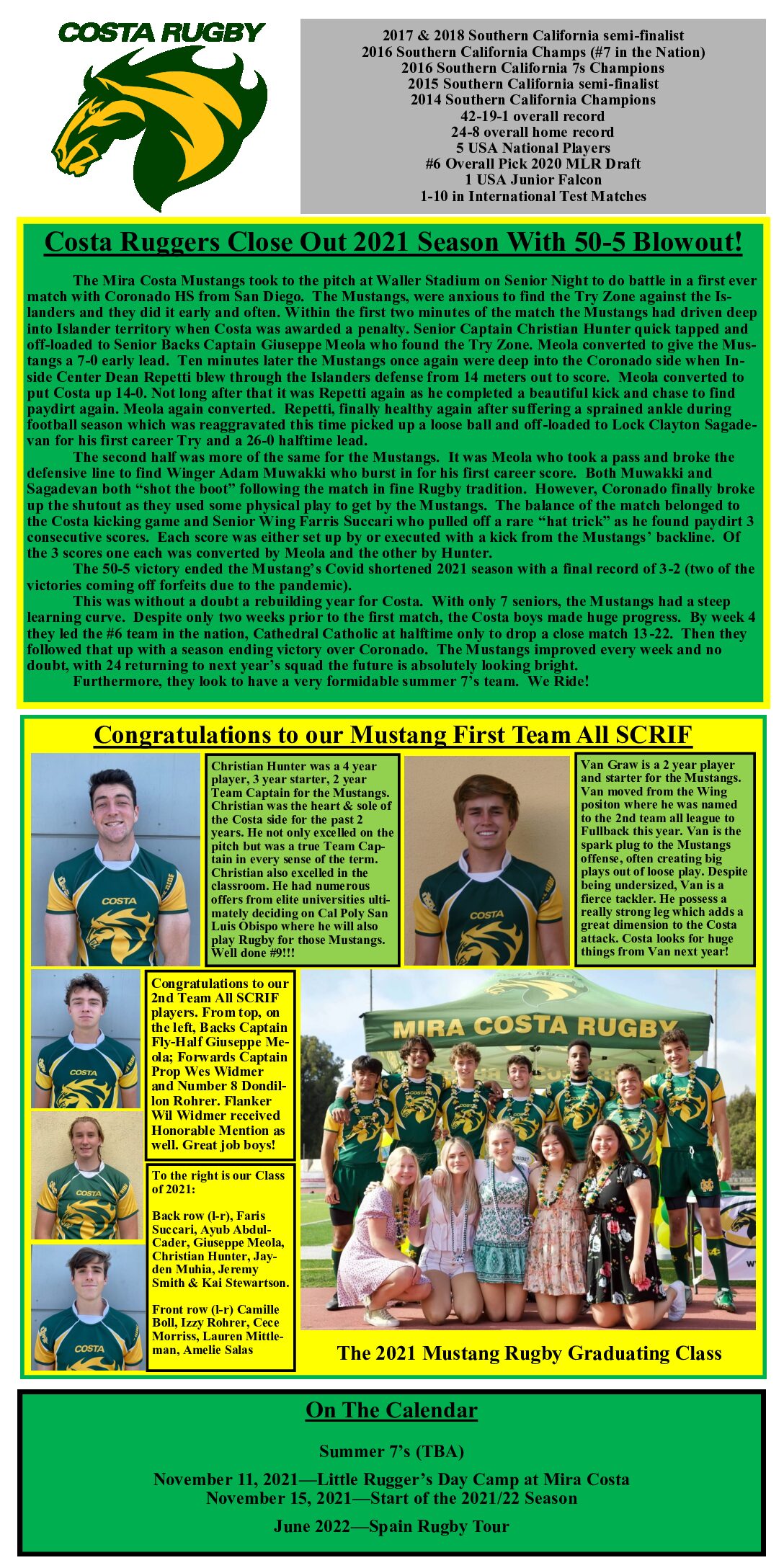 The Mira Costa Mustangs took to the pitch at Waller Stadium on Senior Night to do battle in a first ever match with Coronado HS from San Diego. The Mustangs, were anxious to find the Try Zone against the Is- landers and they did it early and often. Within the first two minutes of the match the Mustangs had driven deep into Islander territory when Costa was awarded a penalty. Senior Captain Christian Hunter quickly tapped and off-loaded to Senior Backs Captain Giuseppe Meola who found the Try Zone. Meola converted to give the Mustangs a 7-0 early lead. Ten minutes later the Mustangs once again were deep into the Coronado side when In- side Center, Dean Repetti, blew through the Islanders defense from 14 meters out to score. Meola converted to put Costa up 14-0. Not long after that it was Repetti again as he completed a beautiful kick and chase to find paydirt again. Meola again converted. Repetti, finally healthy again after suffering a sprained ankle during football season, this time picked up a loose ball and off-loaded to Lock Clayton Sagade- van for his first career Try and a 26-0 halftime lead.

The second half was more of the same for the Mustangs. It was Meola who took a pass and broke the defensive line to find Winger Adam Muwakki who burst in for his first career score. Muwakki and Sagadevan both “shot the boot” following the match in fine Rugby tradition. However, Coronado finally broke up the shutout as they used some physical play to get by the Mustangs. The balance of the match belonged to the Costa kicking game and Senior Wing Farris Succari who pulled off a rare “hat trick” as he found paydirt 3 consecutive scores. Each score was either set up by or executed with a kick from the Mustangs’ backline. Of the 3 scores one each was converted by Meola and the other by Hunter.

The 50-5 victory ended the Mustang’s Covid shortened 2021 season with a final record of 3-2 (two of the victories coming off forfeits due to the pandemic).

This was without a doubt a rebuilding year for Costa. With only 7 seniors, the Mustangs had a steep learning curve. Despite only two weeks prior to the first match, the Costa boys made huge progress. By week 4 they led the #6 team in the nation, Cathedral Catholic, at halftime only to drop a close match 13-22. Then they followed that up with a season ending victory over Coronado. The Mustangs improved every week and with 24 returning to next year’s squad the future is absolutely looking bright.

Furthermore, they look to have a very formidable summer 7’s team. We Ride!