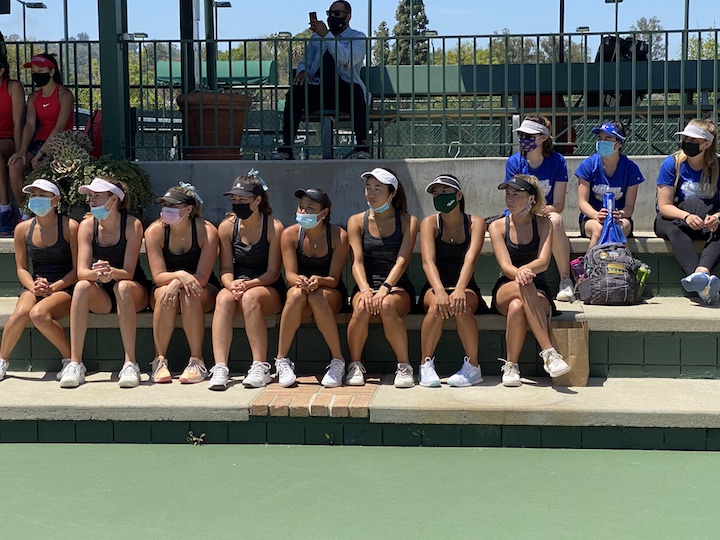 A season that almost did not happen turned out to be a successful campaign that saw Mira Costa attain a #4 Poll ranking in the highest division, CIF Open / Elite division!

The Girls Varsity Team compiled a season 10-1 record with the only loss to eventual CIF Champion, Peninsula High School.  The season ended with a three way tie between Peninsula, Palos Verdes and Mira Costa as Costa beat PV, PV beat Penn and Penn beat Costa during League play. Since the season was shortened, the top 3 teams agreed to share the title for 2021 which, among all the coaches and the teams, was the right way to handle this unique season.

The Varsity girls also had success in individuals as 4 costa teams entered the final league tournament in doubles. Two teams reached the quarterfinals and unfortunately, two Costa teams played each other in the Semi Finals. A finalist showing by Sydney Vo and Kacey Feng has given this team a berth into the top 20 of CIF doubles that will take place in June.

The JV Team again did not disappoint as they won the Bay League JV division and continued the end of the season dominance in Bay League individuals.  Both Champion and Finalist were Costa Girls and Singles Finalist was also a Costa player. Each player will have their respective names on the wall of honor at the Mira Costa Tennis Courts .