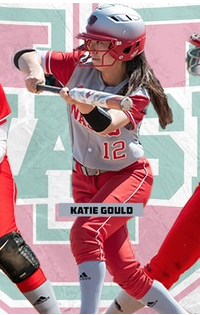 2018 alumna Katie Gould who attends Washington University in St. Louis was named to the All-UAA First Team.  Gould started 33 games and hit .387 with eight doubles, 12 RBI and a team-high 21 stolen bases. She hit .446 (25-for-56) in UAA play, the second-highest mark in the league. Gould was second in the UAA in stolen bases, sixth in hits (46) and 12th in batting average. She hit safely in 27 of 33 games, and struck out just three times in 119 plate appearances.

2018 grad Serena Ponciano who attends NYU was named to the All-UAA Second Team.  Ponciano, who plays shortstop, led the Violets in at-bats (117) and hits (43) and finished with a .368 batting average. She started all 33 games during the 2019 campaign.

2015 Costa grad and Softball Captain Brittany Werre will be playing for the Washington Huskies as they start the NCAA D1 Softball Tournament against Fordham this weekend.  The Huskies were named the 3rd seed for the postseason, and will host Regionals in Seattle this weekend.  The Huskies are co-champions of the Pac-12 and ranked 3rd in the country.  Good luck on the road to Oklahoma!

Costa Softball is excited to follow Ulufa “Fa” Leilua’s impressive season with Mississippi State this year.  As a junior transfer from Arizona State, Fa has hit 22 home runs this season with 52 RBI and was just named to the First-Team All-SEC!  Mississippi State will open NCAA D1 Softball Tournament play on Friday 5/17 in Seattle at the regional site hosted by University of Washington, where they may match up with 2015 Mira Costa grad Brittany Werre and her Washington Huskies.  Fa played for Mira Costa softball for three years in high school and was named MVP in all three seasons, although she graduated from Hawthorne high.  Good luck on the road to Oklahoma!