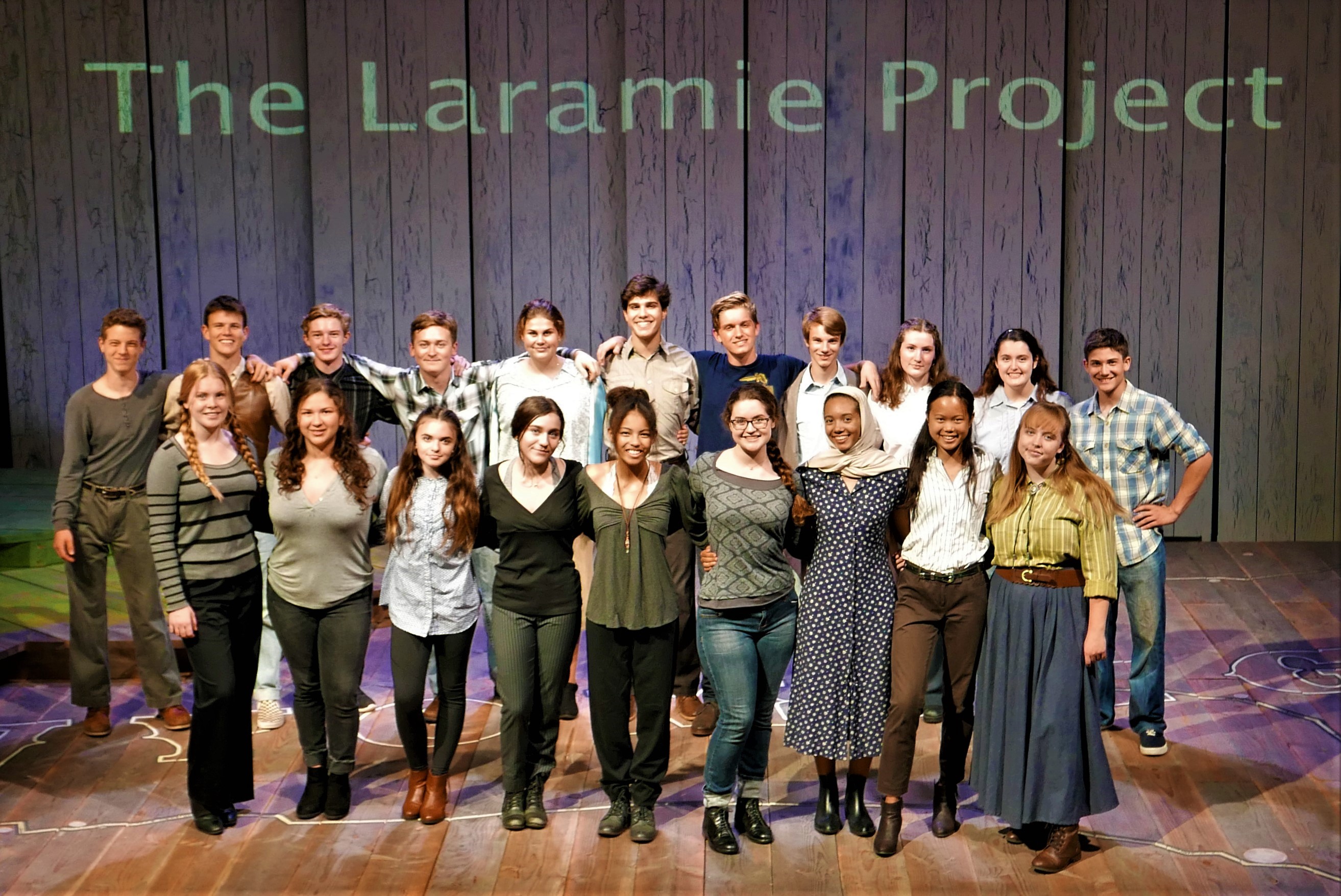 The Laramie Project opened last weekend in the MHCS Small Theatre to great reviews. Audiences were deeply moved by the tragic story of Matthew Shepard, the young gay man who was brutally killed in Laramie, Wyoming in 1998 and whose murder became one of the rallying points for gay rights legislation in this country.
Mira Costa Drama/Tech’s production has our young actors realistically portraying Laramie townspeople interacting with a group of interviewers from the Tectonic Theater Project who spoke with them in the aftermath of the murder. In an ensemble cast, actors slip in and out of various characters as testimony comes from Matthew Shepard’s friends and acquaintances, from the police officers intimately involved in bringing the perpetrators to justice, from prominent Laramie citizens who are dismayed at how their city is being portrayed, and eventually, from the killers themselves.
Presented with the voices of Laramie, and ultimately, of America, audience members are witness to the realities of violence and hate that existed in this country in 1998 and, unfortunately, continue today. In telling the story on stage, this production calls on us to look within ourselves and choose who we are going to be as a country, as citizens, and as human beings. Will we allow ourselves to be shaped by hate or compassion? Cruelty or kindness? Fear or hope?
Don’t miss your chance to see this intelligent, complex, and insightful piece of theatre.
Remaining performances Wed., Nov. 7 at 4:00 pm*, Thurs., Nov. 8 at 6:30 pm, Fri., Nov. 9 at 7:30 pm, and Saturday, Nov. 10 at 7:30 pm.
Tickets online miracostadramaboosters.org, at the MCHS Student Store, and at the box office: $15 Adult, $12 Student/Senior.
*Special $5 student tickets (cash only) will be available for the Wednesday performance beginning at 3 pm at the Small Theatre box office and will be sold on a first come, first served basis. Please note that the suggested attendance age for The Laramie Project is 14+ (for graphic references to the violence committed against Matthew Shepard and some strong language, including a few expletives).
ComedySportz news
On Friday, Nov. 16th, Mira Costa’s ComedySportz team will compete against Palos Verdes High School at 7 pm in the MCHS Small Theatre. Don’t miss your chance to see our CSz home team in action in this comedic improv battle! Tickets $5 at the door.

Please mark your calendar and stay tuned for more info on these matches, as well as additional away games.